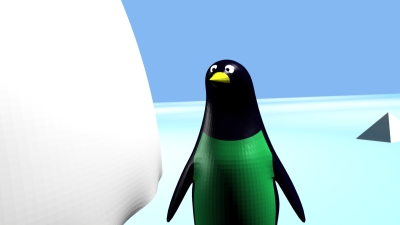 These are clips and short films featuring a Penguin I created as my second computer-created character.

This work is licensed under a Creative Commons Attribution-Noncommercial-Share Alike 2.5 License.
About:Just a quick test animation for me to practice moving the penguin and the camera around.

This work is licensed under a Creative Commons Attribution-Noncommercial-Share Alike 2.5 License. The audio in this video is copyrighted and is not under the same creative commons license as the video.
About:This is my first "real" CG animation. This time I actually somewhat of a story to my animation. Look at it similar to the old black and white Disney and Warner Brothers cartoons where there wasn't a lot of dialog - just music and a simple plot. (A VERY simple plot -- in fact, plot is stretching it for this one)

The purpose of this project was to produce my first computer animation - as I had been itching to finally get something animated. I learned A LOT on this project! Key thing you'll notice I need to work on in the future is working on timing. It is incredibly difficult to figure out how long an action should last. Thus I have a bunch of parts that go a little too fast and some parts that go a little too slow. This is something I intend to work on in the future.

Finally, I'm really happy with how this video turned out, considering what it is: my first attempt at a short CGI, my first attempt at moving things around and animating them, and an impatient streak to finally get this video done which trumped any sense of being a perfectionist with this film. I decided a while back, as I fought with Blender to figure out how to do things, that this would be a very rough video so that I could learn the ropes. Later I could take my time and put out better quality animations and stress over every single detail.


Penguin Flight on Vimeo (requires flash)
On part of this, the sound sounds messed up, but that's Vimeo's fault, not mine. The file sounds fine on my cpu.
Back to Animation Page